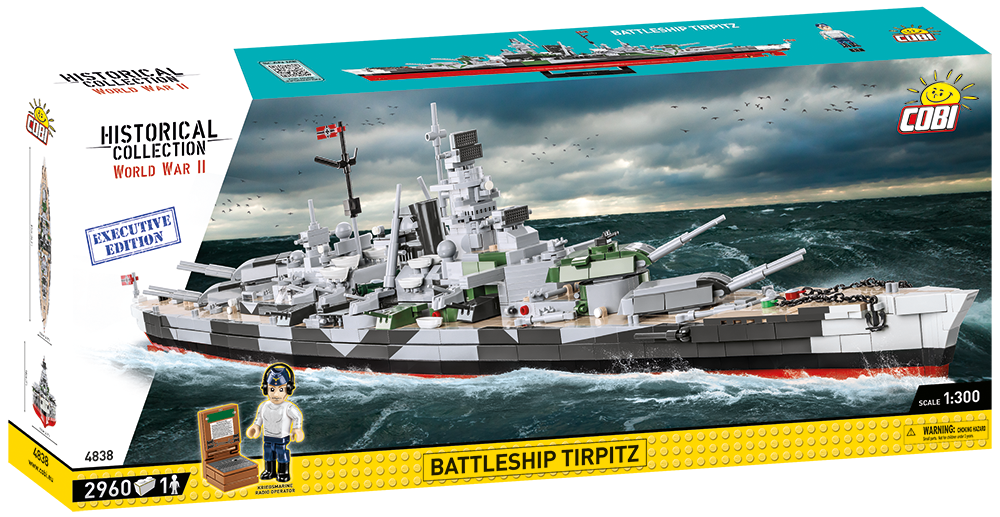 The Tirpitz was a German battleship from the Second World War, launched on April 1, 1939. It was the twin ship of the battleship “Bismarck” and the largest unit of the Kriegsmarine from 1941–1944. It reached its combat readiness in September, 1941. It was sunk on November 12, 1944, near the Norwegian Tromsø by the British Air Force.

The collector’s version of the EXECUTIVE EDITION Battleship Tirpitz has been enriched with an exclusive figure of a German radio operator equipped with the famous German encryption machine ENIGMA. The set also includes two black descriptive plates with the name of the ship and basic information about it. The plates are mounted on the block display stand.

The ship model created by the COBI company was produced in a scale of 1: 300. It has nearly 3,000 elements and is 84.5 cm long. Thanks to the use of the latest available elements and advanced construction techniques, the model faithfully reflects the proportions of the historic ship and retains all of its essential elements, including the original, very characteristic camouflage. It has numerous moving parts such as propellers, rudders, rotating towers and gun barrels that can be raised and lowered. The set also includes a very stable and aesthetic black display stand with a plate with the name of the ship printed on it. As it is a large and quite complex model, we recommend it mainly to veteran collectors and older, experienced brick fans. It does not require gluing or painting, because its entire hull and all elements consist of COBI construction blocks.