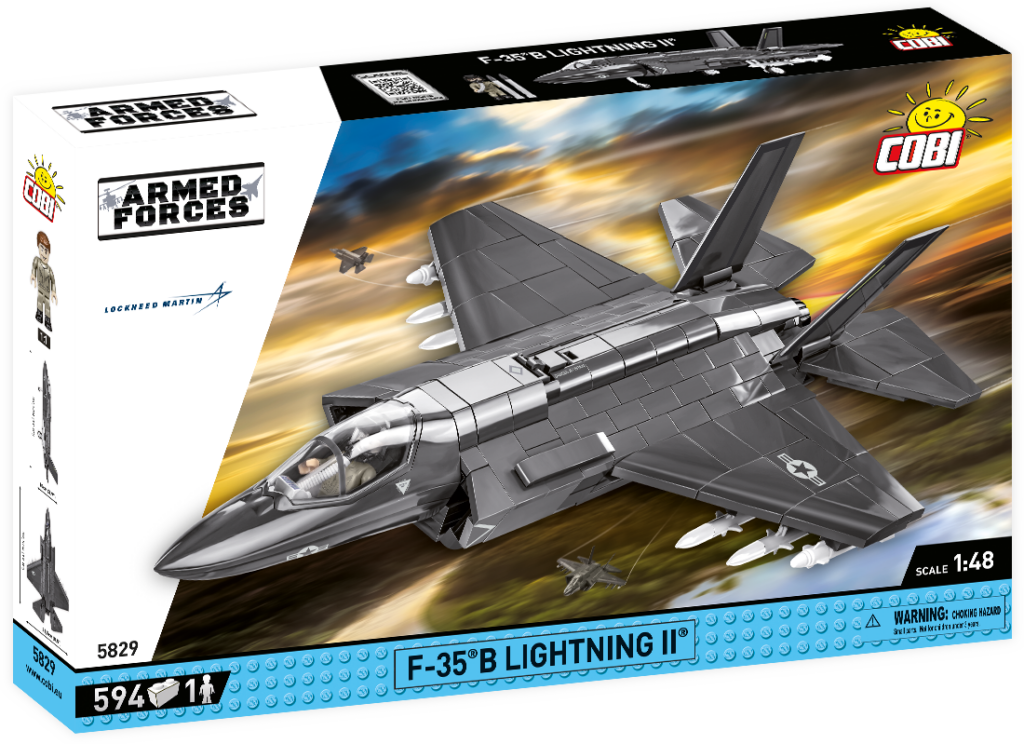 The F-35®B LIGHTNING II® is a single-seat, multi-role fighter designed by Lockheed Martin Corporation. The F-35 version B is a STOVL short-take-off and vertical landing aircraft intended to replace the machines of the United States Marine Corps and those belonging to the British RAF and Royal Navy.

Use 594 of the highest-quality COBI building blocks to build the most modern multi-role F-35®B LIGHTNING II® fighter in the world, licensed by the Lockheed Martin armaments mega-concern. The set has been carefully designed in a 1:48 scale model. The bricks specially designed for this set have been covered with high-quality prints. The characteristic cockpit is made very realistically and can be opened to accommodate a figure of a pilot equipped with a helmet and an oxygen mask with a hose. With the set you also get a block display stand with a plate containing the name of the aircraft!

Thanks to the intuitive instructions construction is simple and will not cause problems for less advanced builders. The set will meet the expectations of aviation enthusiasts, military and block fans. The F-35 will also look great in your collection, no matter how old you are!

The F-35®B LIGHTNING II® has been in service since 2015 and is capable of performing close support missions, bombing and typical fighter air combat missions. The F-35 is a supersonic aircraft with reduced in-flight detectability, has high reconnaissance and electronic warfare capabilities in the field of detection, tracking, targeting and jamming.

The missile armament consists of up to 6 AIM-120 AMRAAM, AIM-9X Sidewinder or AIM-132 ASRAAM missiles in internal ammunition chambers or two air-to-air missiles and two 455 kg bombs. Weapons for destroying ground targets can be JSOW or GBU-39 SDB bombs (4 in each bomb chamber), Brimstone anti-tank missiles, cluster bombs or AGM-88 HARM anti-radar missiles. At the cost of losing stealth property, it is possible to suspend the armament up to four under-wing pylons and two at the ends of the wings (for AIM-9).

The aircraft project is jointly financed by the governments of the United States, Great Britain and other countries interested in purchasing the aircraft. The F-35®B LIGHTNING II® was built under the direction of Lockheed Martin in collaboration with BAE Systems and Northrop Grumman.