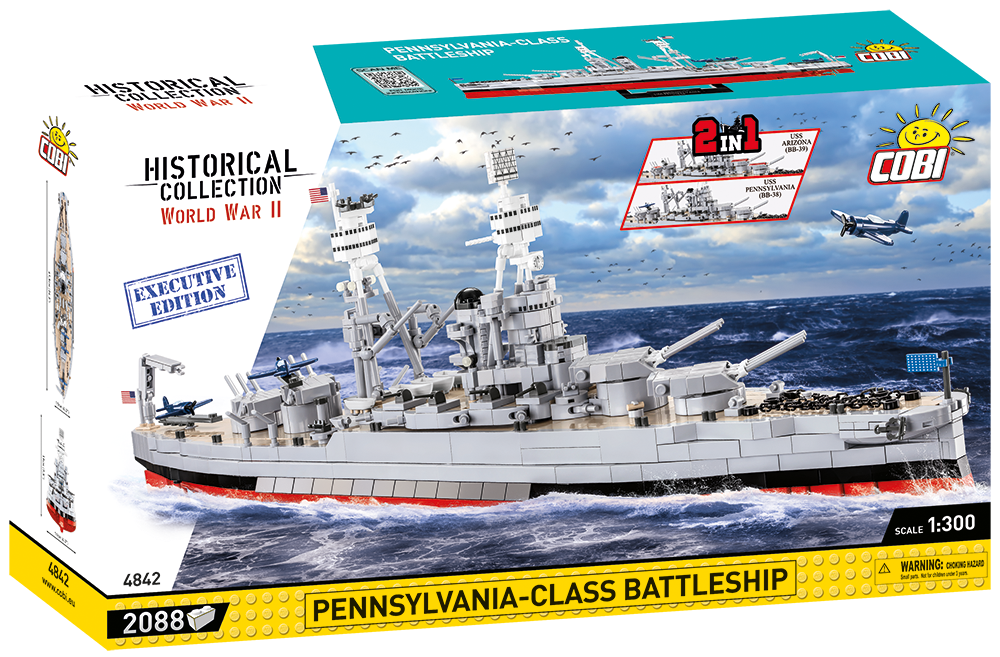 The collector’s EXECUTIVE EDITION Pennsylvania-class ships offers two options for building a historic Pennsylvania-class battleship! Thanks to the included additional bricks with markings and elements of ship features you can choose the construction of the USS Pennsylvania or USS Arizona! Clear and intuitive instructions will easily guide you through the construction process. The ship was designed in a scale of 1: 300 and is 61.5 cm long! Over 2,000 bricks will provide hours of exciting construction. The Executive version also includes a block display stand to which you can attach black plates containing the ship’s technical data and name. Thanks to the use of the latest available elements and advanced construction techniques, the model as faithfully reflects the proportions of the historic ship as possible and retains all its essential elements, including the original, very characteristic shape of the hull and superstructure. The model has numerous moving parts such as: propellers, rudders, rotating towers and gun barrels that can be raised and lowered. The set is also a perfect complement to the collection of historic COBI ships.

The USS Pennsylvania and USS Arizona were two battleships launched during the Great War. During their service, the ships underwent modernization. Both Pennsylvania-class ships were present at Pearl Harbor during the Japanese attack on December 7, 1941. During the raid on the USS Arizona there was a catastrophic detonation. The majority of the crew were killed and the ship sank, becoming a symbol of the Japanese attack. The wreckage of the battleship has never been recovered. The elements of the superstructure protruding above the water surface were removed, leaving only the barbet of the third main artillery tower. In 1962, the USS Arizona mausoleum on the wreckage was opened. During the attack on Pearl Harbor, USS Pennsylvania was only slightly damaged and served throughout World War II in the Pacific, undergoing subsequent modernizations. During the Battle of the Surigao Strait (October 25, 1944), Pennsylvania was hit by a torpedo. Severe damage to the drive made the repair unprofitable. In 1946 the obsolete ship became a target for nuclear weapons tests.