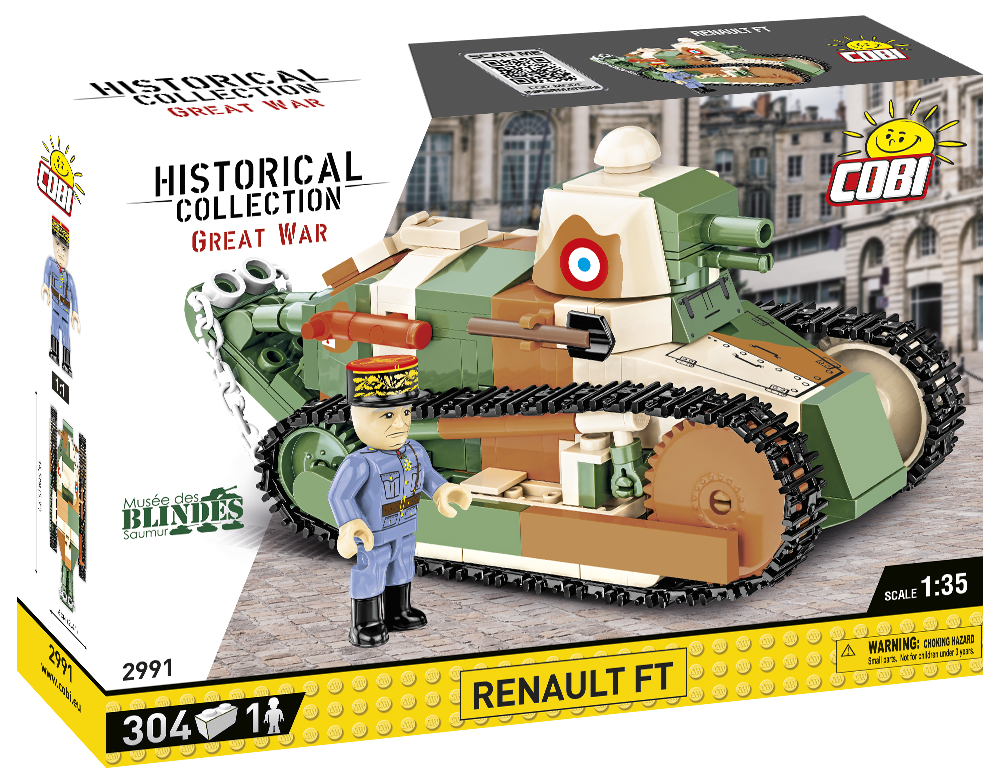 A unique set that embodies the COBI slogan: Build history, piece by piece! The Renault FT was a French light tank from the First World War. It was designed in 1917 and went down in history as the benchmark tank for almost all later designs. The block model was developed under the supervision of the world’s largest museum of armored weapons in the Musée des Blindés, Musée Général Estienne, Saumur (France) in 1:35 scale, which fits the figures and the rest of the Great War collection. The Renault FT was used by many countries, including France, Belgium, Turkey and Poland through World War II. It was the most effective armored vehicle of the Great War. Its task was to support the infantry and the tail installed at the rear was to help overcome the trenches. The rotating turret provided effective fire in different directions. This model is distinguished by characteristic narrow, movable tracks. This is an example of the exceptional craftsmanship of COBI designers, who perfectly reproduced all proportions and details of this vehicle.

A special figure is included in the set. Jean Baptiste Eugène Estienne (1860-1936) was an outstanding French general of artillery, specialist in military engineering and one of the founders of modern French artillery and armored forces. It is thanks to his enormous efforts that the implementation of armored forces into the army was prepared and the tactics of their use were developed. The general in France was nicknamed “Père des Chars” (the father of the tank) and became the patron of the famous Musée des Blindés in Saumur.

The Renault FT with the figure of general Estienne is a must for enthusiasts of history, armor and a beautiful model for the collection dedicated to the Great War. Our GREAT WAR collection, refreshed in 1:35 scale, cannot do without this most important set!

For fans of Polish history, we recommend an alternative set (COBI-2992) with a Renault FT tank in Polish markings. 2992 is accompanied by a figure of General Józef Haller, the commander of the “Blue Army” and the Father of Independence of the reborn Republic of Poland.