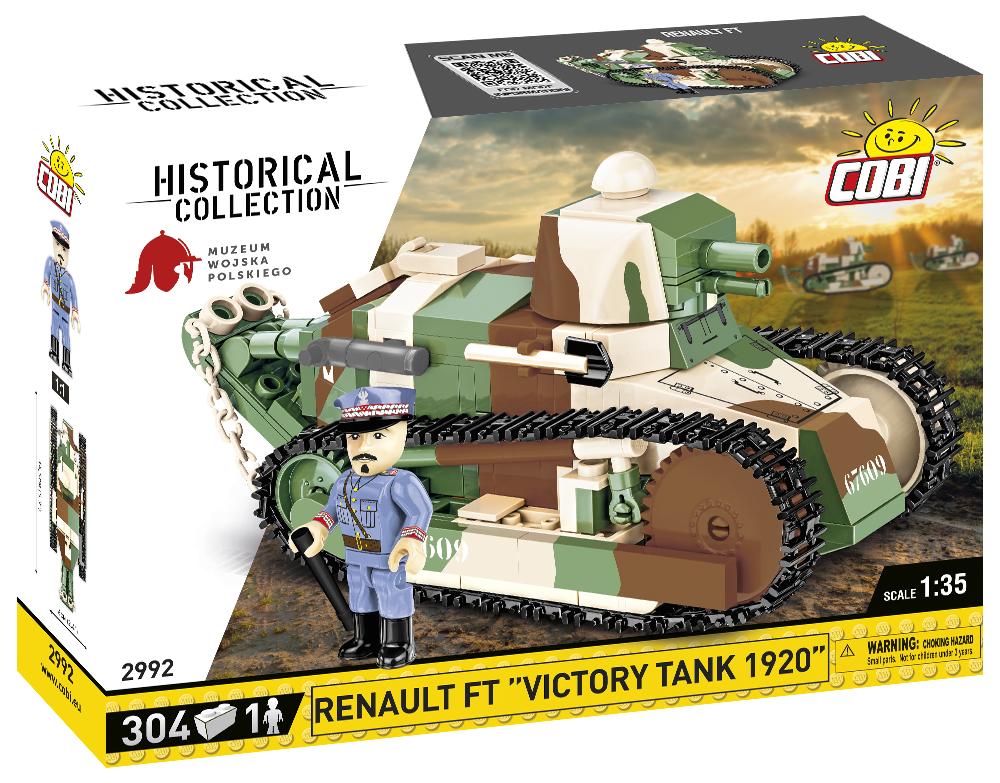 A patriotic set that embodies the COBI slogan: Build history, piece by piece! The Renault FT was a French light tank from the First World War. It was designed in 1917 and went down in history as the benchmark tank for almost all later designs. It was the most effective armored vehicle of the Great War. The block model is a reproduction of a famous tank, which is in the Polish Army Museum in Warsaw. We recreated the very characteristic painting and markings in detail. The popular 1:35 scale fits the figures and the rest of the Great War collection, as well. The Renault FT has been used by many countries, including France, Belgium, Turkey and Poland. The Renault FT appeared in Poland together with the “Blue Army” under the command of General Józef Haller. During the war with the Bolsheviks in 1920, Polish armored units performed very well in combat.

A special figure is included in the set. General Józef Haller (1873-1960) is one of the fathers of independence in the reborn Polish Republic. The commander of the “Blue Army”, after Poland regained independence he held many command positions, took part in the war of 1920, and was a political and social activist, scoutmaster, Chairman of the Polish Scouting Association and President of the Polish Red Cross Committee. He was also a Knight of the Order of the White Eagle and Virtuti Militari.

The Renault FT with a figure of General Haller is a must for enthusiasts of history, armored weapons and a beautiful model that carries a huge dose of history. This is a must have in your collection.

For all history enthusiasts, we also recommend an alternative kit (COBI-2991) with a Renault FT tank in French paint. It comes with a figure of General Jean Baptiste Eugène Estienne, known in France as the “Father of Tanks”. The set was prepared under the watchful eye of the famous Musée des Blindés Saumur!