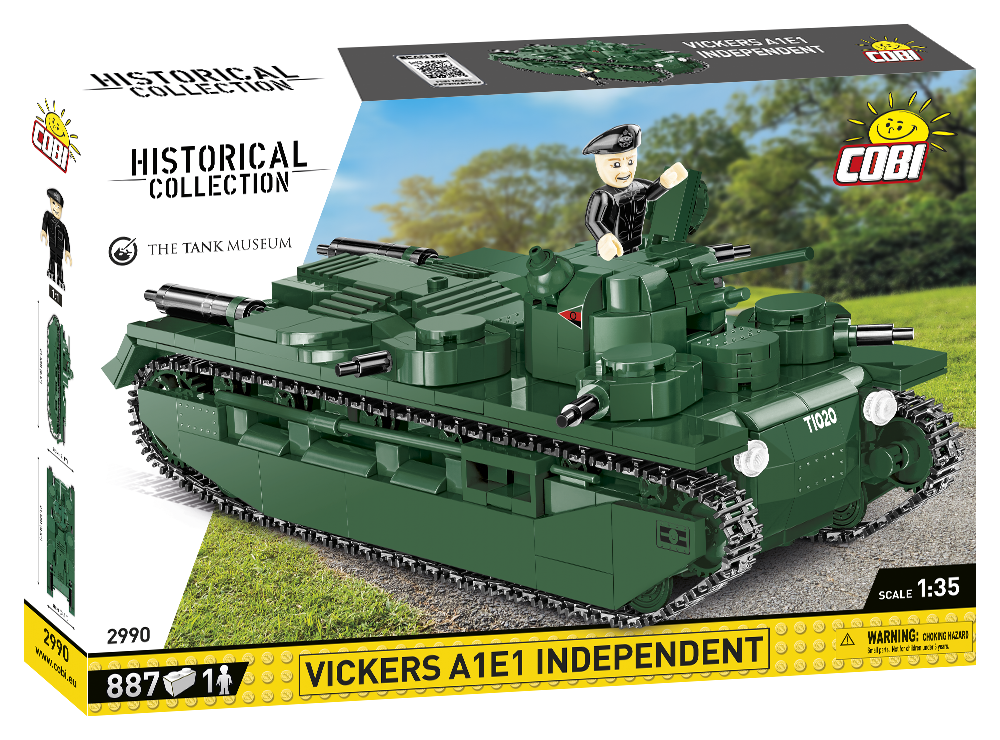 Exceptional, unique and the only one in the world! The Vickers A1E1 INDEPENDENT is a British prototype heavy tank from the interwar period. Only one was made, and it’s well cared for as a “star” in The Tank Museum in Great Britain. A characteristic feature of this unusual vehicle is its multi-turret design! The tank has five rotating towers! The largest is equipped with a 3-pounder cannon. The remaining four are equipped with a Vickers machine gun. The order for a multi-turret heavy tank was placed by the General Staff of the British Army in 1924. In 1926, a prototype of the tank was presented. Due to the lack of funds, further work on this project was abandoned. The design solutions used in the Independent were also used in the later British Medium Mark III and Cruiser Mark I constructions. The designs of the Soviet T-28, T-35 and T-100 tanks are also surprisingly like the Vickers Independent, and this is not a coincidence.

Use a set of 887 COBI blocks to build a realistically reproduced, historical prototype tank from The Tank Museum collection. The vehicle was designed in cooperation with the Tank Museum in 1:35 scale. Particularly noteworthy are numerous details, durable, characteristic prints and the specialized elements used. The model continues the series of museum exhibits released in a block version. More experienced designers will also certainly be tempted to build Soviet versions of multi-turret tanks. The set includes a figure of a British tanker in a beret with a printed emblem of the Royal Tank Regiment! The set is completed with a large plate with the name of the set and the printed logo of The Tank Museum.

A historical tank is a great gift idea, regardless of the age of the recipient. The set is perfect for collectors, lovers of armor, military technology and history enthusiasts. It’s also a great start to the adventure with Polish COBI building blocks. Build history, piece by piece, with COBI.